Game of Thrones Locations in Spain

Let’s find out how much of Westeros is in Spain!

Game of Thrones is undoubtedly one of the most popular and massively acclaimed shows in television history – commonly regarded as the greatest show of all time. Breaking all kinds of TV records, from award nominations, to production size and viewership stats – this beast of a show still remains an incomparable pillar in fantasy drama television!

Known for stunning imagery that lends itself well to the fantastical world created by author George R. R. Martin, production took to the most stunning corners of our world to give life to the five-novel narrative. While King’s Landing took shape in Croatia’s Dubrovnik and the land beyond the wall was primarily filmed in Iceland, Spain’s 17 autonomous communities presented many spectacular locations that made up the world of our favorite show. Let’s journey across these wondrous spots all over Spain!

Andalucía
Remember Dorne? Well, here it is in real life. Seville was a primary location for the show, and The Alcazar specifically was a major visual component for the kingdom of Dorne. 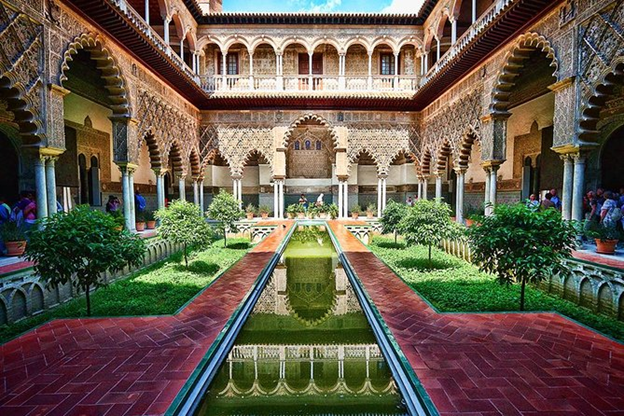 The Roman Bridge in Cordoba was shown in aerial shots where it represented the bridge over the Rhoyne that joins the lands of the city of Volantis. CGI was used to extend the length of the bridge to make it look bigger to connect the two halves of Volantis together. Filming in this area later took place in Osuna, where the iconic scene in which Daenerys is first seen flying atop her dragons was shot in this Sevillian town’s bullring: Plaza de Toros. Osuna is now home to the only Game of Thrones museum in Europe! 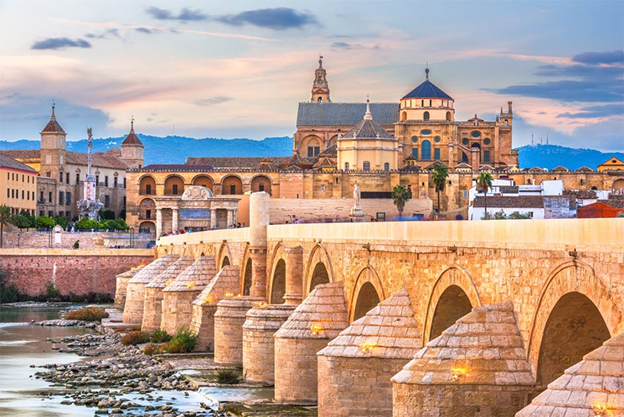 The region of Almeria was utilized for many Game of Thrones locations. The Alcazaba of Almeria was altered to play a double role, stunting as both Meereen and the kingdom of Dorne. 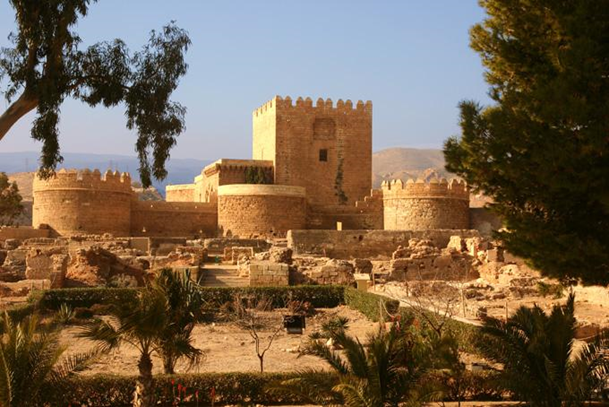 Torre de Mesa Roldán in Carboneras was used as part of the Meereen city pyramids. 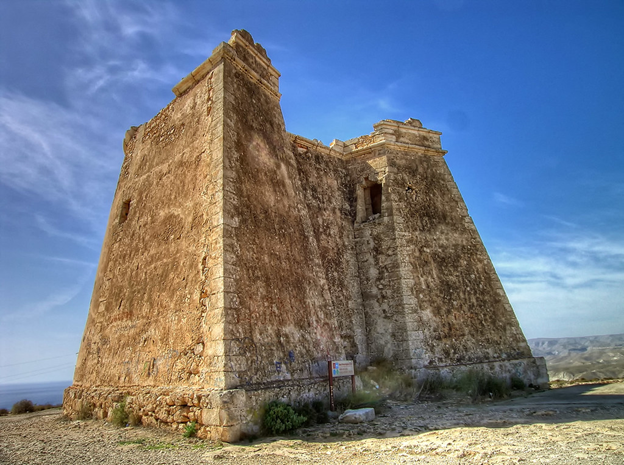 Almodovar del Rio Castle in Cordoba gave life to the Highgarden where Olenna Tyrell said her last words before dying to Jamie Lannister, admitting that she’s the one who killed Joffrey. 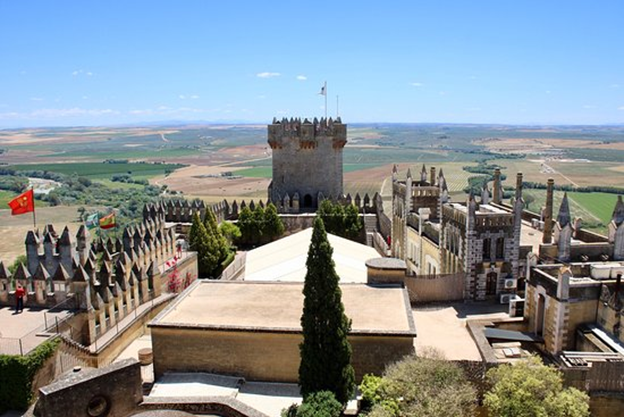 The Royal Shipyards of Seville offer unique architecture that tremendously suits the dungeons of the Red Keep. 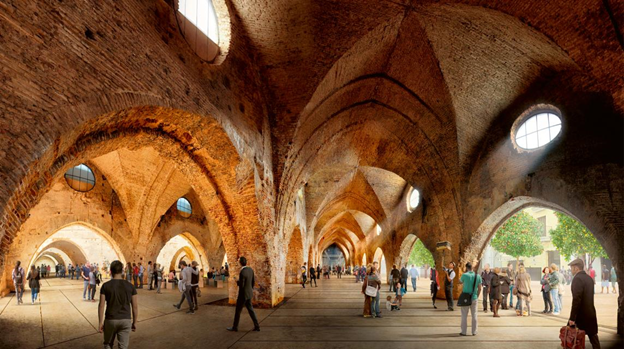 Italica Ampitheater in Santiponce is the highly recognized setting, known as Dragonpit, a meeting point for many main characters. 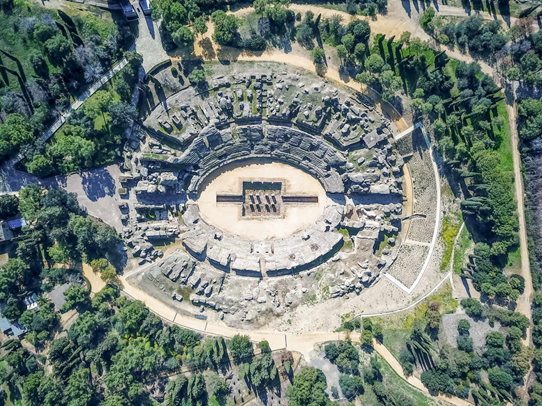 The Basque Country
The island monastery of San Juan de Gaztelugatxe will surely look familiar, as it is the iconic setting where Daenerys’ dragons are seen soaring up high above. This beach setting is instantly recognizable, and a gorgeous setting not to be missed out on. 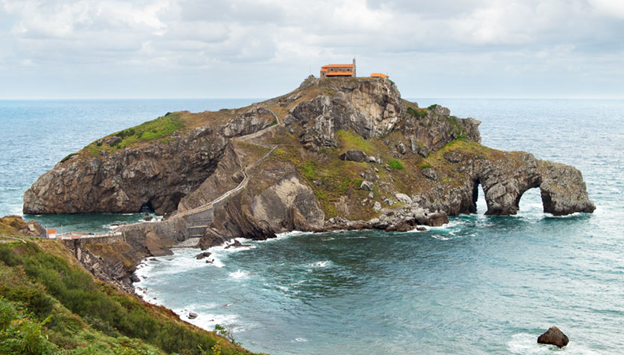 Next to Itzurun beach in Zumaia and Muriola beach in Barrika is where the show set the fictional birthplace of Khaleesi, the same place she planned to take the iron throne. 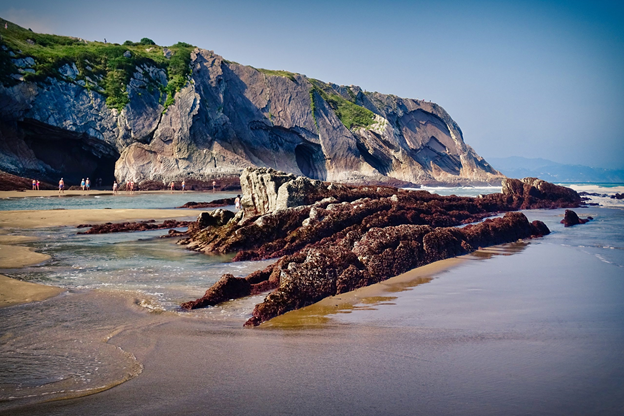 Since season 7 premiered, thousands of people arrived at the Basque Country asking for some “Dragonstone”.

Extremadura
The city of Caceres is home to several settings utilized by the production: Plaza de Santa Maria, Plaza de los Golfines, Arco de la Estrella and the Palacio de los Becerra – all of which were made into the streets that Euron Greyjoy took on his way back to King’s Landing. 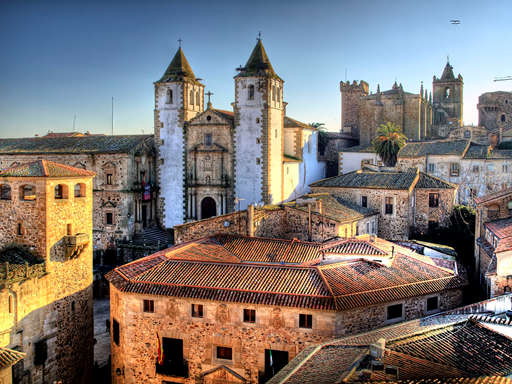 Another location of the city is the Castle of Trujillo, dominantly from the last episode of season 7, whereby the Daenerys siege to King’s Landing is recreated. This place was great to picture Euron Greyjoy bringing back captives to King’s Landing. The location was also used to portray Casterly Rock as well. 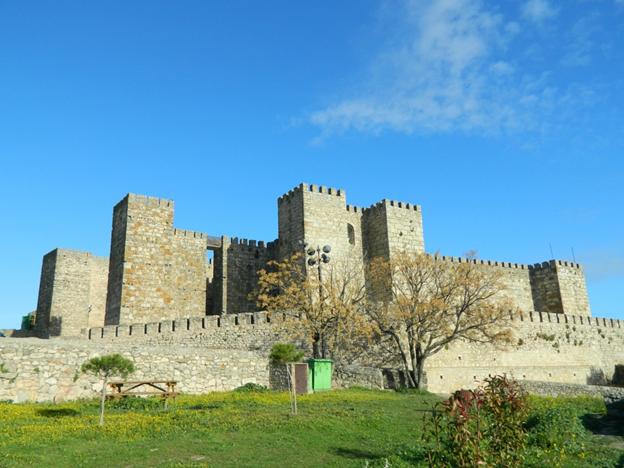 The Barruecos en Malpartida de Cáceres is famous for being the place where we witnessed the dragons’ carnage upon the Lannister army, led by Jaime Lannister, in the episode named “The Spoils of War”. 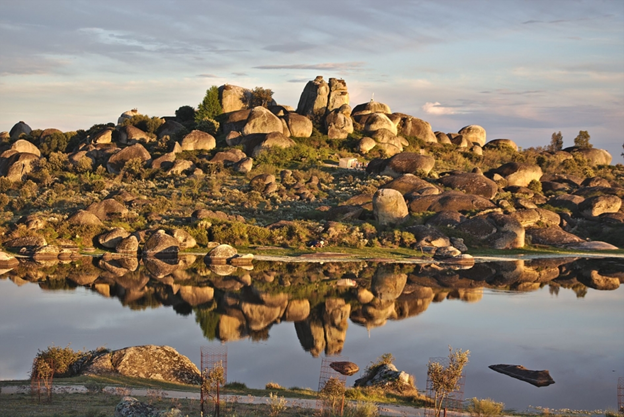 Catalonia
The gothic atmosphere given off by the main structures across the entire autonomous community of Catalonia helped provide the necessary visual moods for many settings in the narrative.

Predominantly the Spanish city where the most was shot in is Girona, remarkably appearing in every episode of season 6! Girona was first used to visually represent the city of Braavos, where Arya Stark trains to be part of the faceless men. 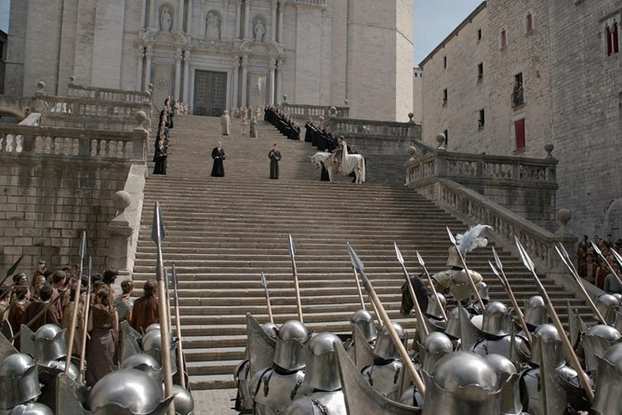 The Girona Cathedral makes an appearance as Arya sits next to it, then as the Great Sept of Baelor in which Queen Margaery was to start her walk of shame. Girona’s cathedral is the spot where Cersei burnt down a building with wildfire. 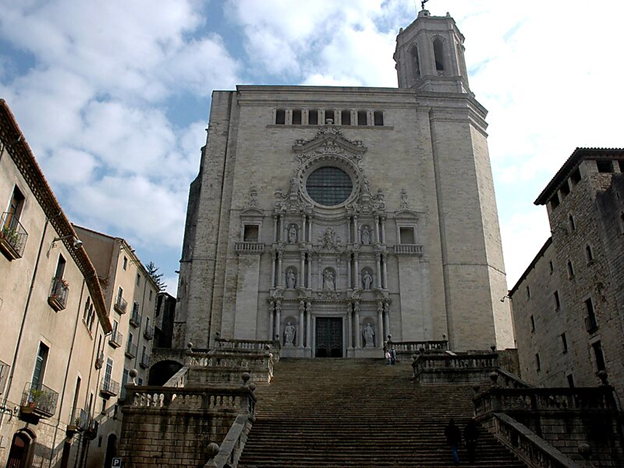 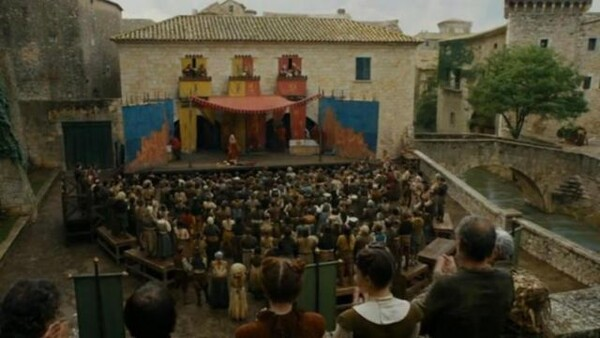 And even the Arab Baths and Pujada de Sant Domenec. 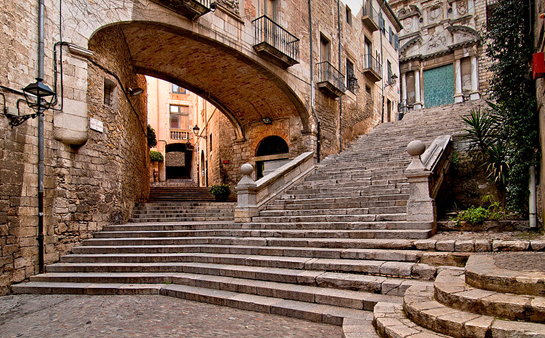 Pere de Galligants is the library where Sam Tarly studies to become a master. 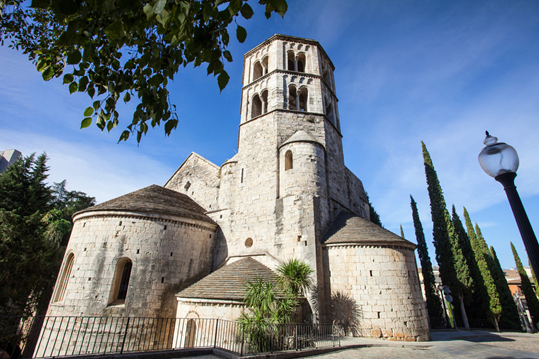 Castle of Santa Florentina in Canet de Mar represented the home of House Tarly, where Sam and Gilly spend time in season 6. If you’re thinking of visiting, this location is private property but definitely still worth the visit for the view alone. 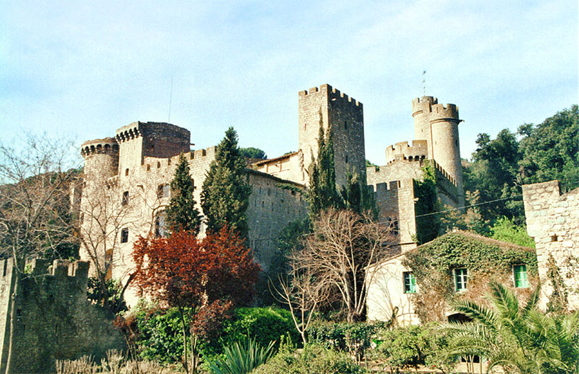 Miscellaneous
Valencia’s city of Peniscola is also a popular setting where tourists seem to enjoy reliving their Game of Thrones fantasy – pretending like they are actually walking in Meereen. The Plaza de Santa Maria and the Pensicola Castle garden ought to be places for you recognize from the show. Spend your day wandering through the beautiful Artillery Park where Tyrion, Missandei, and Gray Worm planned the future of the city. 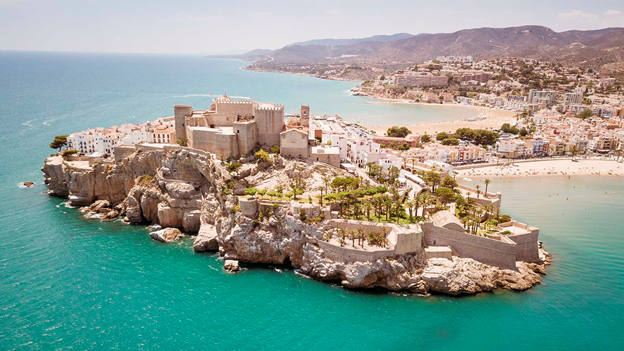 The Castle of Zafra in Molina de Aragon is the setting of the shocking scene where Bran envisions the Birth of Jon Snow and discovers the secrets that Ned Stark had kept from them. The tower was Dorne’s Tower of Joy, and it is made out of sandstone and sits atop a large rock overlooking widespread meadows below. This is a view not to be missed! 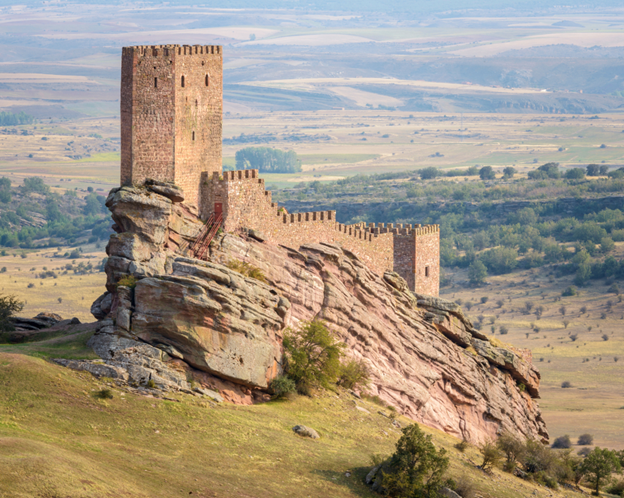 So what are you waiting for? Turn off your TV and head out to the places that will bring your fantasies to life! Contact us @TheBarcelonian for further information on any of the above locations!