The celebration of decoration

Spain is a country known for throwing street festivals like no other. With a culture dedicated to sharing the greatest of foods, celebrations and jubilant moments with its people, it is for certain that no matter what time you find yourself roaming the heart of the Iberian Peninsula – you’ll always find a festivity to be a part of. August is a lovely time to visit Barcelona, besides the long sunny days at the beach and the bustling atmosphere filled with exploring tourists, the city graciously invites you to join its ever popular Gràcia festival! 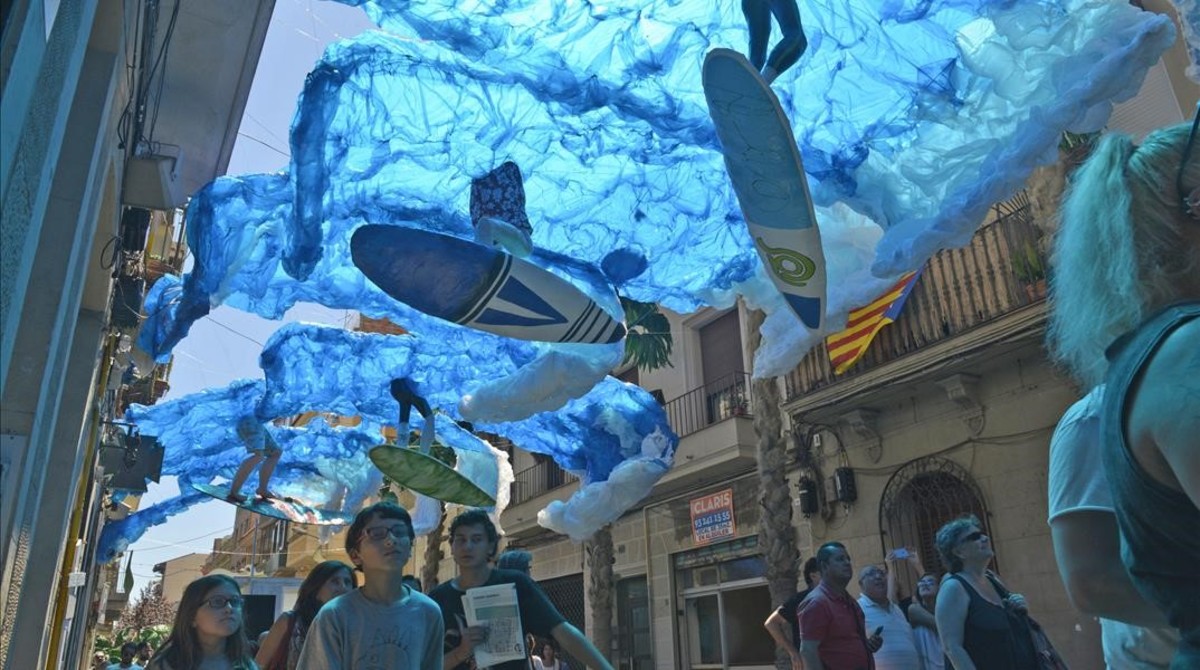 It is quite common, especially in good weather, to find some roads in Barcelona blocked from vehicle entry and filled with wandering crowds of a street fest. Different festivals occur year long, most of them showcasing music, dance and artistic performances. Locals are very inviting and are pleased to have all present tourists as part of their celebration, sharing their street food, artwork and featured products. The Gracia festival stands high and mighty as a highly anticipated and successful annual celebration in Barcelona, with fixed dates from the 15th and till the 21st of August each year. Let’s dive into a bit of Gracia history…

The first ever Gracia Festival was held on the day of Assumption of Mary, way back in 1817 when Gracia (now a district of Barcelona) was considered to be its own humble village – famous for its farming and agricultural production. The celebration, which started out as part of the Sant Isidre Festival that commemorates the patron saint of agriculture, gradually shifted to celebrate and pay homage to the proud locals of the neighborhood and their creative works. With Gracia becoming a neighborhood known for its colorful environment and artistic appeal, the Gracia festival took on many shifts from its original form – becoming more of a secular civic celebration with less Catholic influence (a noticeable pattern in the trajectory of fiestas across Catalonia). The festival kept true to its original intent, bringing communities together, celebrating local residents and sharing the good times with the thousands of visiting tourists. 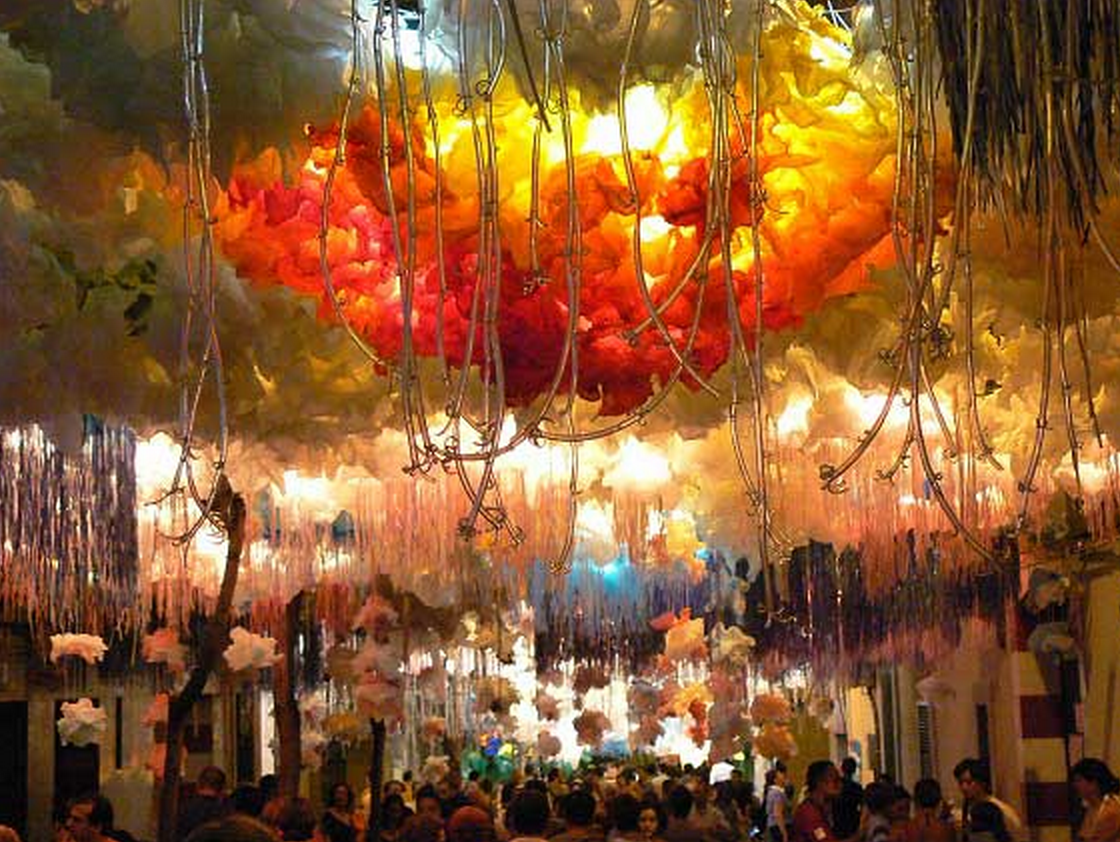 What is the Gracia festival about these days?

Today, the celebrations filling the streets of Gracia every August is a testament to the colorful creativity and wild imagination of its residents – as the festival now takes the form of a set of neighborhood competitions, whereby the residents plan their own street, square and balcony decorations under certain themes. The street décor is called engalaments in Catalan, covering 18 streets and squares of the district, decorated under different themes and competing for titles and prizes. For the full length of the festivities, the district of Gracia is immersed in wild and surrealistic designs, fully ornamented with handmade decorations from recycled materials, art galleries of local talents and the recreation of popular movie scenes and sets. The fiesta rings true to the bohemian and artistic nature of the district, and brings forth lively music performances, popular street dances and artistic exhibitions. Other activities are that are unique to the culture and could only be found in Catalan festivities include castellers (from the Catalan word for castles, is the cultural phenomenon of erecting human towers), Correfoc (fire runs in which costumed devils with big sparklers run and dance through the streets, as they are followed by parading percussion performers), traditional Catalan song and dance performances (such as the Sardana dance), special street foods around every corner and the display of massive handmade structures that are typical of Gracia festival designs. Over 500 activities take place during the festival and it is common to find a foam party, a water fight and an open-air cinema taking place. Are there any more reasons as to why you shouldn’t miss out on this outstanding celebration?! 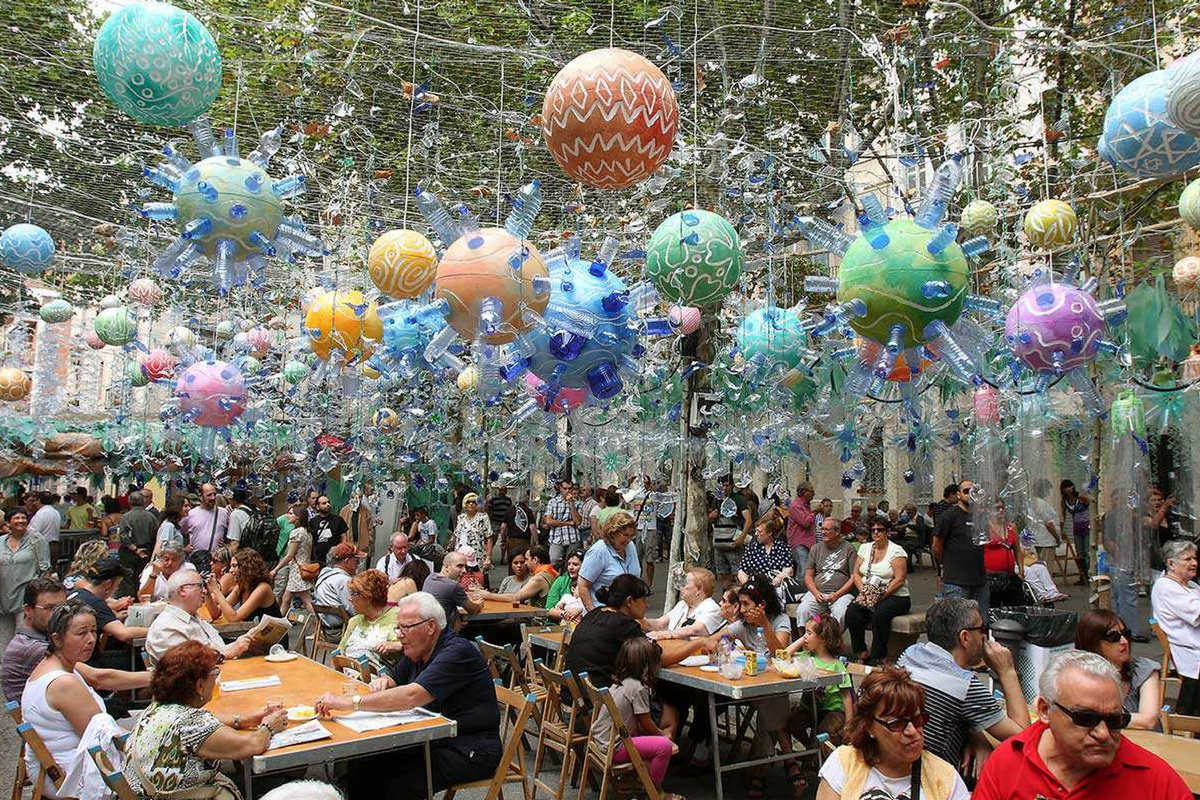 The magic of the Gracia festival is the element of surprise that the fiesta is known for, as each street (competitor) selects a theme for months ahead and begins executing designs that are kept secret till the unveiling of their creative executions. The winners for the best decoration are announced on the 16th of August, while the ornaments and figures are still intact and not so worn out. We recommend that you visit the streets of Carrer de Joan Blanques and Carrer de Verdi – the winners of “best decorated street” for many years of the festival. 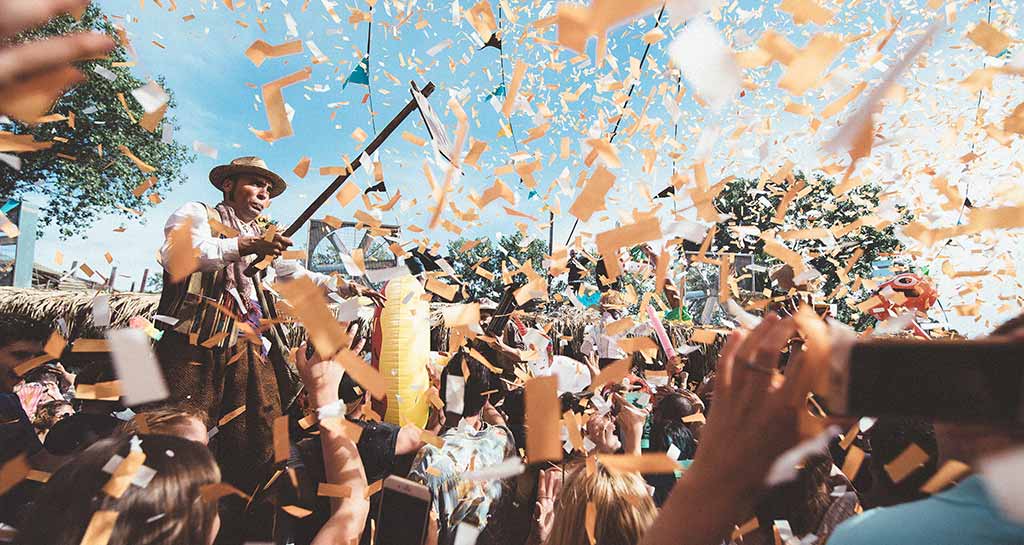 So who’s invited to join the festival?

Everybody is! No matter where you come from, the organizers of the event (aka the residents of Gracia) welcome you with open arms to join the ton of fun that their festival brings. Kids especially have a great time being a part of the festivities as there are multiple games, kids’ puppet theater and carnival rides dedicated to them all over the neighborhood streets. Cercavila, a fun parade that opens up the festival, is a wonderful spectacle for kids to be a part of – with giant 13 feet (4 meters) tall colorful paper-mâché dolls called gegants representing royalty and other characters including capgrossos (which translates to ‘big heads’). These giant characters roam the streets until they meet and dance together in a big parade across the streets of Barcelona. 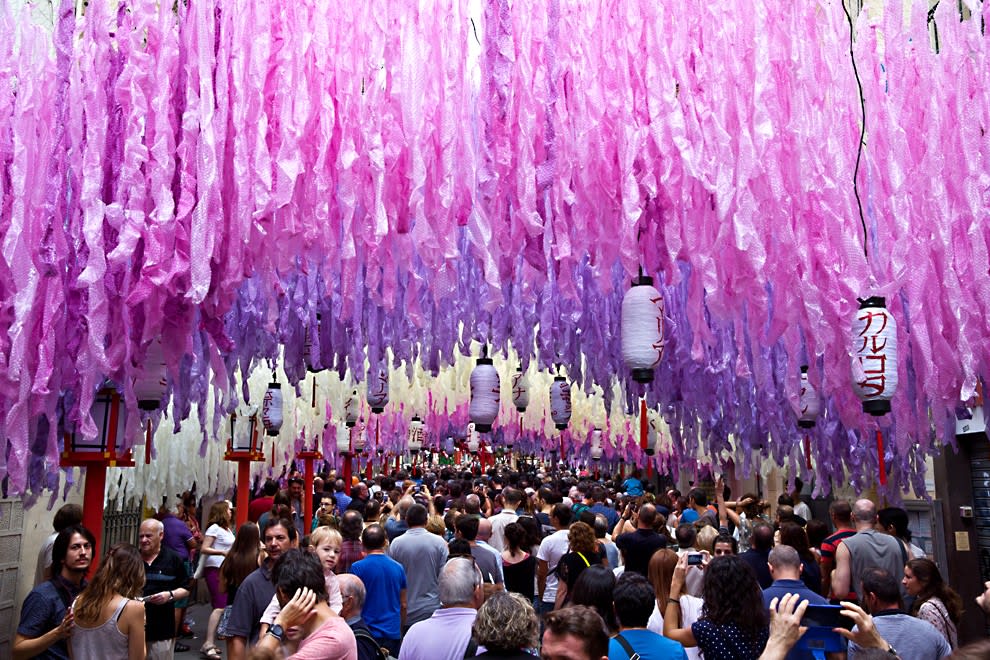 How does one become a part of the celebration?

The answer is quite simple… Just show up in Barcelona’s district of Gracia between the 15th and 21st of August – your entry is for FREE! When you enter the festive neighborhood, you could purchase the full Festa de Gràcia programme which includes all the necessary information, directions and maps just for €1! Make sure you try to buy some of the delicious Catalan street foods sold at the shacks and tables, or an art piece as a token of appreciation for all the creative hard work and open spirit that the people of Gracia are known for. It is also important that visitors respect the neighbors, as the festival takes place in small and narrow streets surrounded by apartment buildings, so try to keep it down if you find the time has passed 1 am. 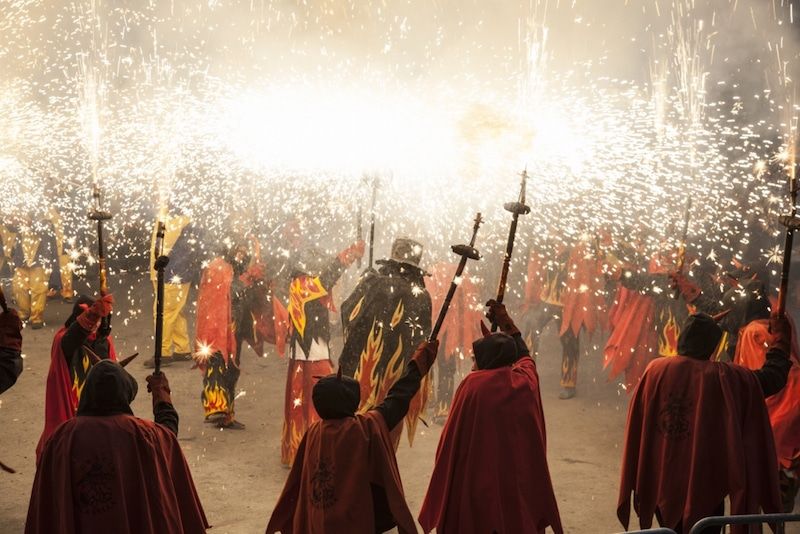 To make the best out of your Gracia experience here are some tips: If you’re there to party and dance till you drop go at night, if you want to enjoy the decorations and the artistic aspects of the festival be there morning till afternoon. Most places in Barcelona close during the festival as the crowds all head up to Gracia for the fiesta, which makes that time of year great if you prefer to visit the center of Barcelona minus the jam-packed bustle.

Festa Major de Gràcia is a unique traditional experience that gives every visitor a peek into the local living and civic cooperation of the proud people of the district – filled with Catalan traditions and joyous times; there is not a single moment to be missed! What are you waiting for? Book your stay at Barcelona for the week of the Gracia Festival and be a part of this one-of-a-kind event!