Grapes have long been perceived, since the dawning of human civilization, as diversely delicious symbols of fertility, royalty, leisure and in some cultures: luck!

In true Spanish style, we'll be deep diving into the celebratory traditions of New Year’s Eve involving some green grapes – 12 of them, to be precise. Feliz Año Nuevo!

History of Grape Representation
From Ancient Egyptians to the classical era of Greek and Roman civilization, every culture pertaining to the lands surrounding the Mediterranean Sea have some incorporation of the grape. Luxury Tropes, otherwise known as settings that give way for people to show off their wealth, have been integral parts of Ancient Rome, Ancient Greece, “Arabian Nights” Days and Western depictions of the Indian Golden Age. This luscious fruit is not only appreciated in the raw form, but also its juice is historically sought after for the production of thousands of variety wines and spiritual libations.

Spanish wine history dates back to around 1100 BC, when Phoenicians founded the trading post of Cadiz in southwestern Spain, though many archaeologists believe that wine dates back to 4000 BC, much before the Phoenicians. However, it was the latter that brought the ancient grape to the Spanish mainland, and the rest is sweet and bubbly drunken history! 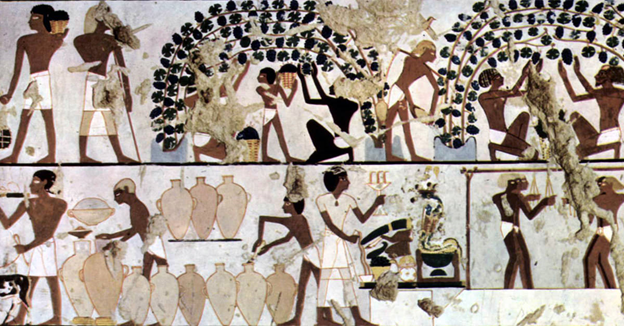 Grapes & Wine in Spain
Spain is undoubtedly one of the biggest powerhouses in grape and wine production today, ranking as the third largest producer of wine worldwide. Though the entire country embraces grape growing and juicing (amounting the vineyard area within the mainland to be the world’s highest at 2.4 million acres!), it is most popular within these three regions of Spain:

Welcome to the winemaking region of Spain, a province in the northern part of the country filled with picturesque vineyards and world-renowned local wineries. Subdivided into three zones, with each responsible for harvesting different types of grapes that eventually blend together and produce some of the world’s finest wine.

The autonomous community of Castile-La Mancha led the production of wine in Spain in 2019. In that year, this region alone accounted for nearly 17 million out of the 33 million hectoliters of this alcoholic beverage produced in the European country. 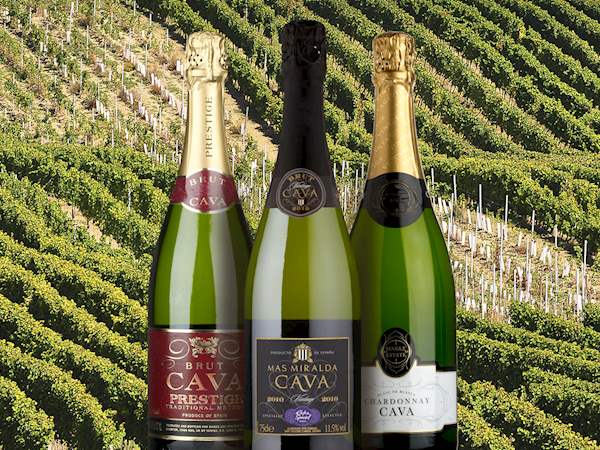 It is argued that this region of Spain (the very home to your beloved Barcelonian!) brings native grape varieties that produce some of the world’s most exquisite wines. The best known Catalan wine region is Penedès, which is where they make the best Cava (more on this sparkling gem later!).

Spain has long been a prolific wine-producing country, and from its unique local produce comes the country’s seven most popular wines:

and last but not least, is the co-star of a Spaniard’s new year eve: Cava! (Sparkling Wine) 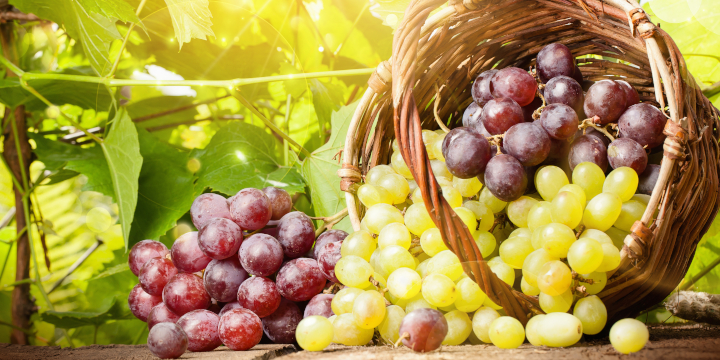 Cava & Grapes for a Spanish New Year
New Year's Eve in Spain is known as Nochevieja (Old Night). It is a custom to stay at home till midnight – making this night a very intimate and family-oriented Spanish event. As the country tunes in to the televised image of the Puerta del Sol in Madrid, where thousands of people flock to the square and usher in the new year; everybody eats, drinks and counts down at midnight – however things are done a little different around here… and you guessed it: grapes are involved!

Las Doce Uvas de la Suerte (The Twelve Lucky Grapes) is the Spanish way of welcoming the new year. Forget the fireworks, dropping a giant ball or making loud crackling noises and sounds – we’re talking about 12 green grapes, chimes, chin-chins and a whole lotta chewing! Yes, I’m sure you’re dying to know more… Here is all you need to know. 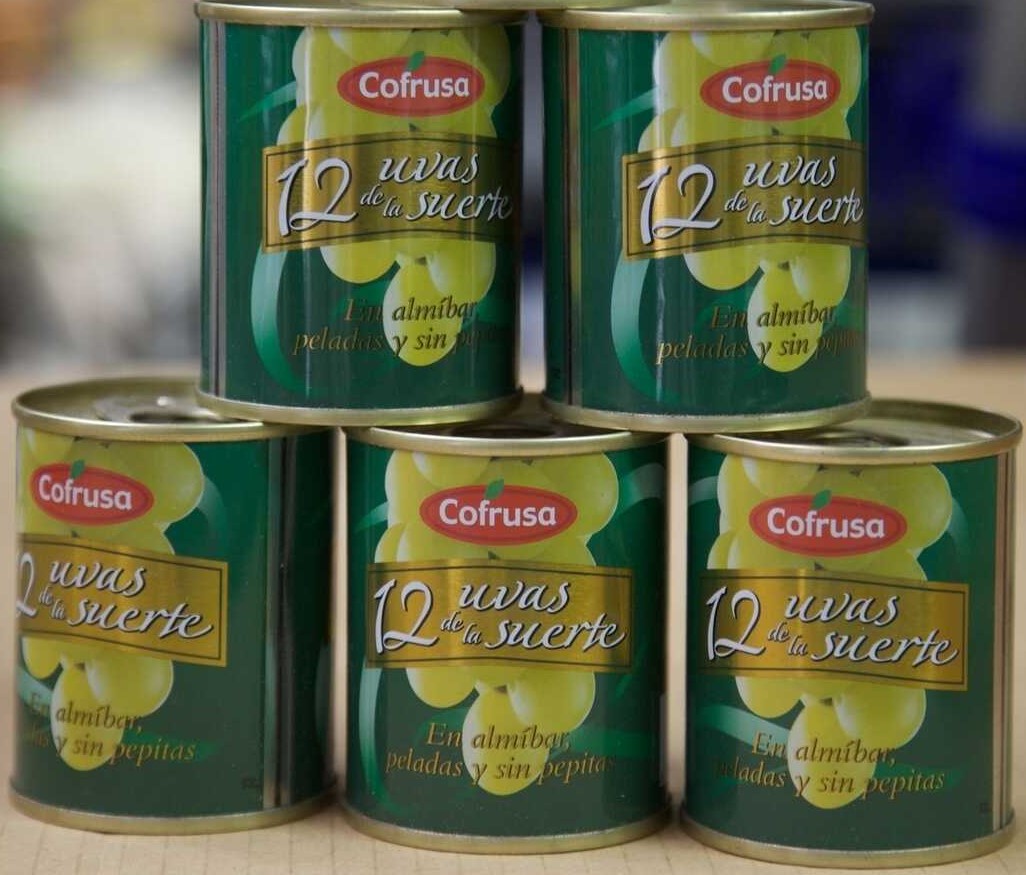 The tradition dates back from at least 1895, but really took off in popular practice in 1909. The act mainly centers around consuming the grapes individually with the 12 synchronized bell chimes as the clock strikes midnight on December 31st. The 12th and final bell chime welcomes the new year into your life and the last green grape in your basket into your mouth. Every participating Spaniard on this night spends the last 12 seconds of their year downing these big juicy balls of green. Sounds like fun, yeah? But why?

Call it superstition or just a fun and healthy cultural spectacle, but according to tradition: eating all Twelve Grapes leads to a year of good luck and prosperity. It is also believed in some areas of Spain that the act wards off dark witchcraft and overall evil – however, it is safe to say that it is just an interesting way for Spanish families to celebrate, eat and drink together; ringing in the new year with an optimistic anticipation of prosperity and luckiness. While it doesn’t sound all that hard or complicated to perform the act successfully, you’d be surprised to see just how fast these seconds fly, how chewy the grape skin could be, and how inconvenient it is to bite into a seedy grape (or better yet, the bitterness of a crushed seed itself!). Many things could go wrong, so tell me… are you feeling lucky? 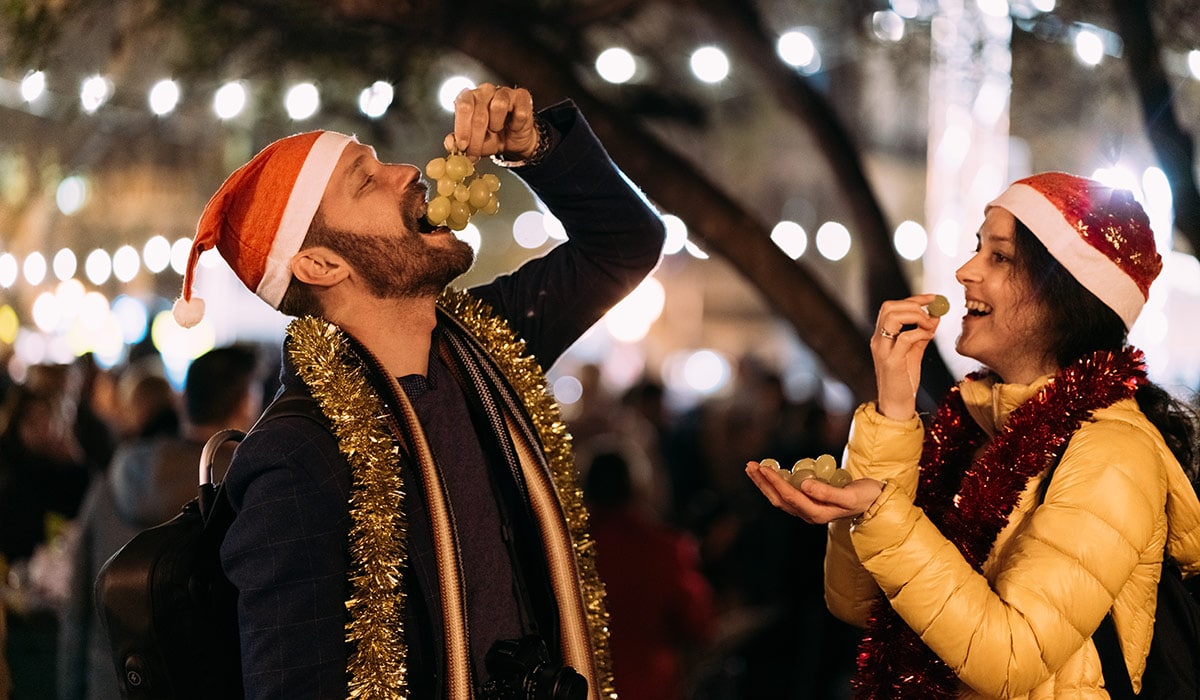 The Twelve Grapes are not only symbolic of the 12 hours on the chiming clock, but also the upcoming 12 months of the year, allowing participants (or at least those who are fast enough) to make a single wish with every grape. The traditional variety of grape consumed on this occasion is called Aledo. These grapes mature late and are not harvested until November and December – making them extra fresh and juicy in time for the new year celebrations!

This Spanish New Year
While the world is still unfortunately inundated by the rapid resurgence of COVID-19 and its variants, Spain (like most countries of the world) still managed to celebrate the start of 2022 beautifully. While the festivities were more indoor this year than ever before, it still felt natural for the Spaniard families to spend an intimate evening with their beloved ones: wishing, kissing and needn’t we forget the chewing! 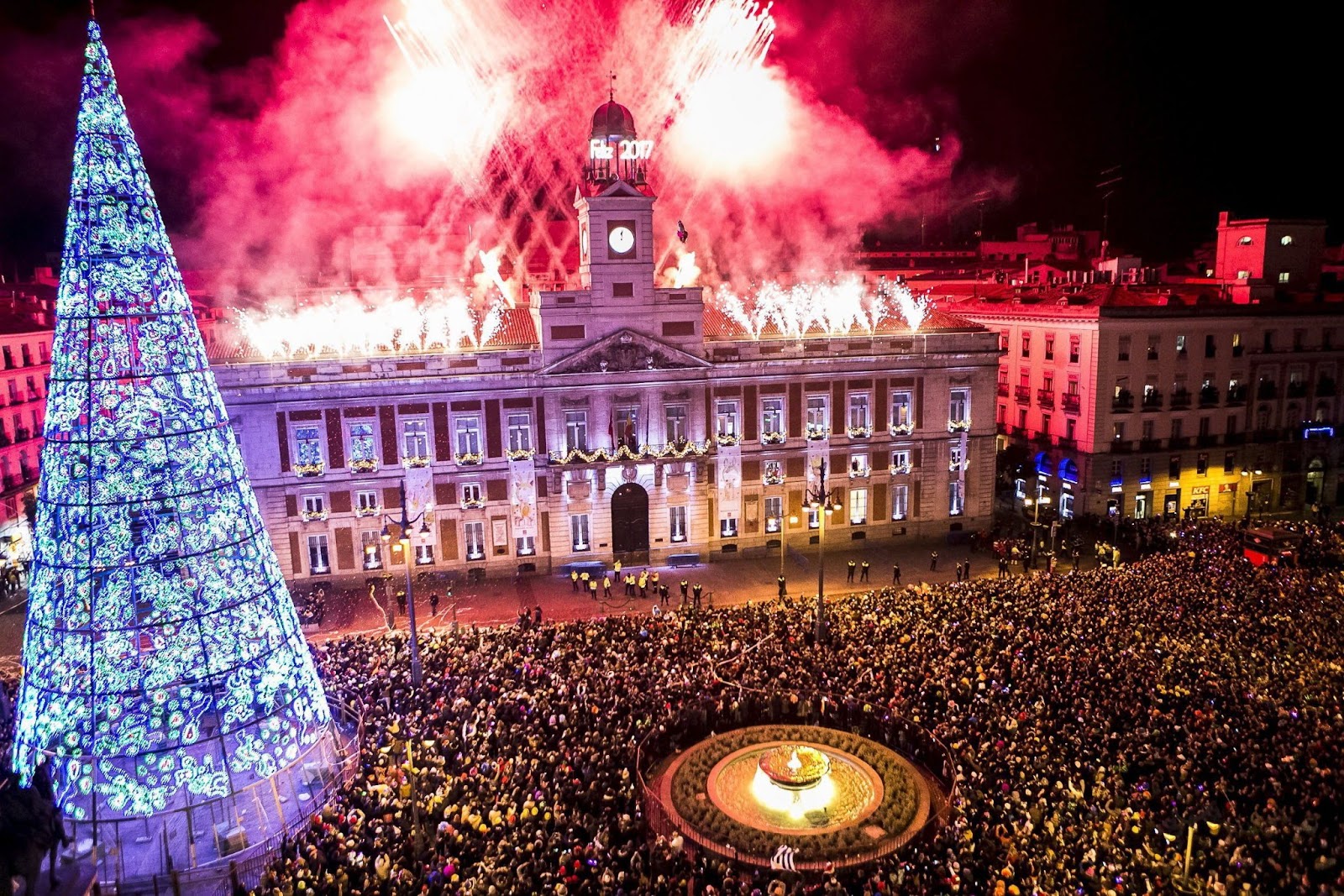 Make sure you fill this upcoming year with exciting trips and new places to discover – and we’re pretty sure that all this wine-talk got you excited to take on a Wine Tour in Spain! Here is one Wine and Cava Tour that you surely mustn't pass on.

As we take on the new year, unknowing of what’s to come; The Barcelonian would just like to wish you a safe and lucky year ahead, filled with fun adventure, prosperity and a whole lotta luck.