Ollie, Nollie or Shuvit – here is where to do it all

Barcelona is a metropolis known for many great things: remarkable structures, dazzling street art, gorgeous sandy beaches, tons of parties all year long and constant bustling crowds of visitors and tourists enjoying their Barcelona trip. However, did you know that it is also a haven for skateboarders? The city that came to be known as the European capital of skateboarding is a great meeting point for all professional and aspiring skateboarders of the world, but what makes it so special? Why do skaters love to skate in Barcelona so much? And where are the best spots to skate freely? In this blogpost we will dive into what makes Barcelona one of the best skate cities in the world.
So what makes Barcelona so special and loved by skaters?

We start off with the conditions that affect all outdoor sports: the weather in Barcelona. Though Europe is known to consist of rainy and even snowy countries throughout most of the year, the Catalan city of Barcelona sure makes the exception. On average, Barcelona experiences only fifty-five rainy days a year – this means that skaters generally have 310 days to relish in the dry weather outdoors. The balmy climate that the region is known for truly creates the perfect conditions for outdoor skating. Oftentimes sunny and rarely with an overcast sky, Barcelona’s weather is a great contributor to the expanding skating scene. 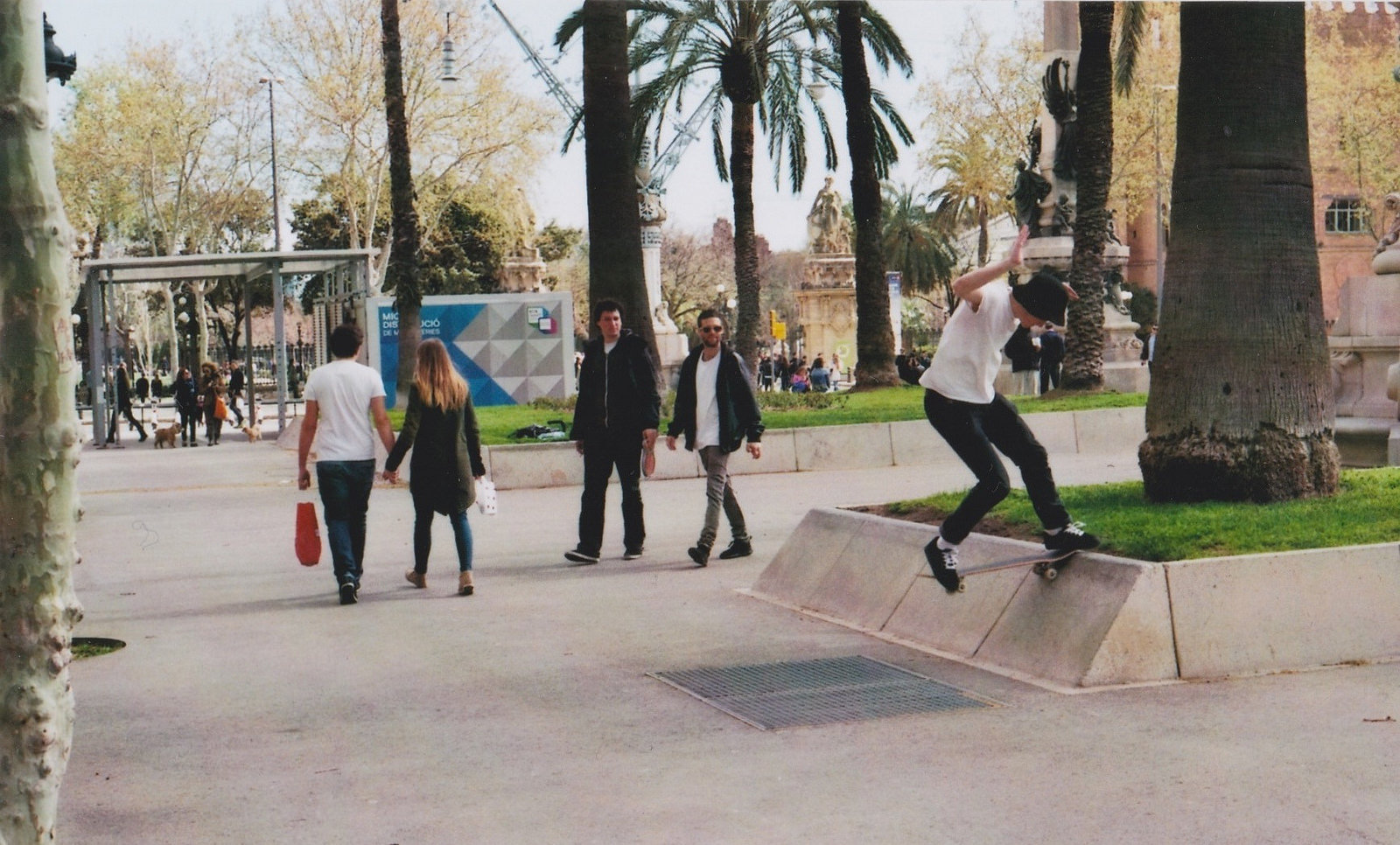 The chill and laid-back culture of Barcelona is another great contributor to the growth of the skating scene in the city. When compared to other places, even the nearby large cities of the region, Barcelona proves great tolerance towards skaters. Leniency, generally speaking, is a prominent trait of Catalan people, and Barcelona is a prime example with its massive inclusion of a variety of artistic and athletic activities that might be deemed intolerable elsewhere. The city seems to have an everlasting youthful appeal thanks to the colorful murals, tags and graffiti that fill its streets, and the dynamic skaters that keep them lively. That is not to say that one can’t get in trouble for going overboard and becoming a public nuisance or threat. This is a place where you can skate freely, but also responsibly and respectfully!

This city appeals to skaters more than others because Barcelona is quite skate-centric itself, with a plethora of fantastic skate shops open all over the city, and even a skateboarders’ hostel! Catering to the ample skating community within the city and to visiting skaters as well are affordable skate shops where you can purchase new boards, skating shoes and even fix up or enhance your own board. Skaters are generally humble folk who like to maintain modesty, and Barcelona’s affordability truly assists them with that. Being relatively cheap when compared to other major European cities, Barcelona is a great option for skaters in terms of affordability – even with accommodation prices for those visiting.

Speaking of accommodation, remember how we said Barcelona has a skateboarders’ hostel?! Check it out right here! This is what seals the deal on the city being a skating haven – with an accommodating hub for skaters right in the heart of the city, in Sagrada Familia, called The Sant Jordi hostel. A great way to meet people and get to grow as a worldwide skate community, this international hub was even designed for skaters and has a basement mini-ramp! They also organize free of charge parties/bar crawls almost every night and offer newcomer skaters helpful tips on skating in the city, as well as guidance on all the best skate spots. 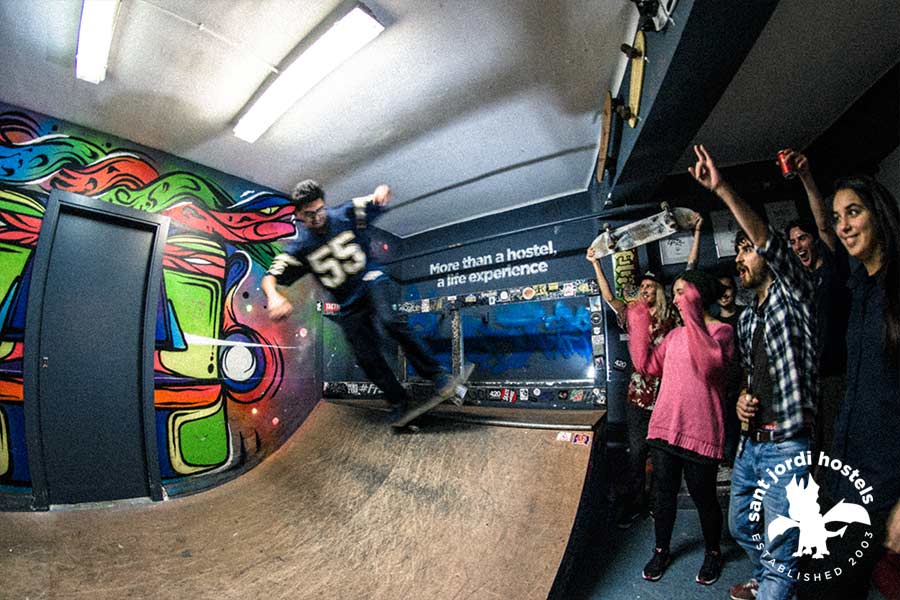 This is what it all comes down to. Barcelona is ultimately (and arguably) considered the best skate city in the world – not only based on its sizable skate community, but also because of its numerous skating spots and parks. In addition to its architecture, the city's abundance of squares, benches and public spaces that are there to cater to its population during the warmer months, attract skate tourists from around the world, all year long. Barcelona’s streets, if you ask any skater there, are said to be the smoothest ever. They are also filled with ledges, gaps, banks, rails and just about everything a skater dreams of – but why is that? Here’s the back story: For the first time ever in 1992, the same city hosted both the Olympic and Paralympic games, and that city was of course, Barcelona. After spending more than ten billion dollars on infrastructure and preparations to make everything wheelchair accessible (check out our blogpost on wheelchair accessibility in Barcelona here!), this resulted in the most “skatable” city in the world! With its perfect grounds, a couple pushes has a skater cruising down for blocks, and even these blocks often contain skate-friendly rails and pavements!

We’re talking about BCN skate spots here, and we can't help but speak a bit about the world famous skating spot of Museu d’Art Contemporani de Barcelona, aka MACBA (check it out just for the outstanding artwork it showcases!). The atmosphere of this spot is not matched anywhere else. With a flat ground surface and smooth ledges that are perfect for grinding and manuals, this spot has been documented in skate magazines and documentations all over the world. More than just a place to skate, this spot is also known for being a hang-out point where all skaters get to assemble, make new friends and spend time with one another – not to mention showing off new tricks and skills right in front of everyone! Official days for skateboarding at MACBA are on Tuesdays and Sundays after 2:30, but you can pretty much catch people skating there at almost any time of day and on any day of the week. Be wary of nearby cops, however, as hassling with them could cost skaters a ticket or even their board. 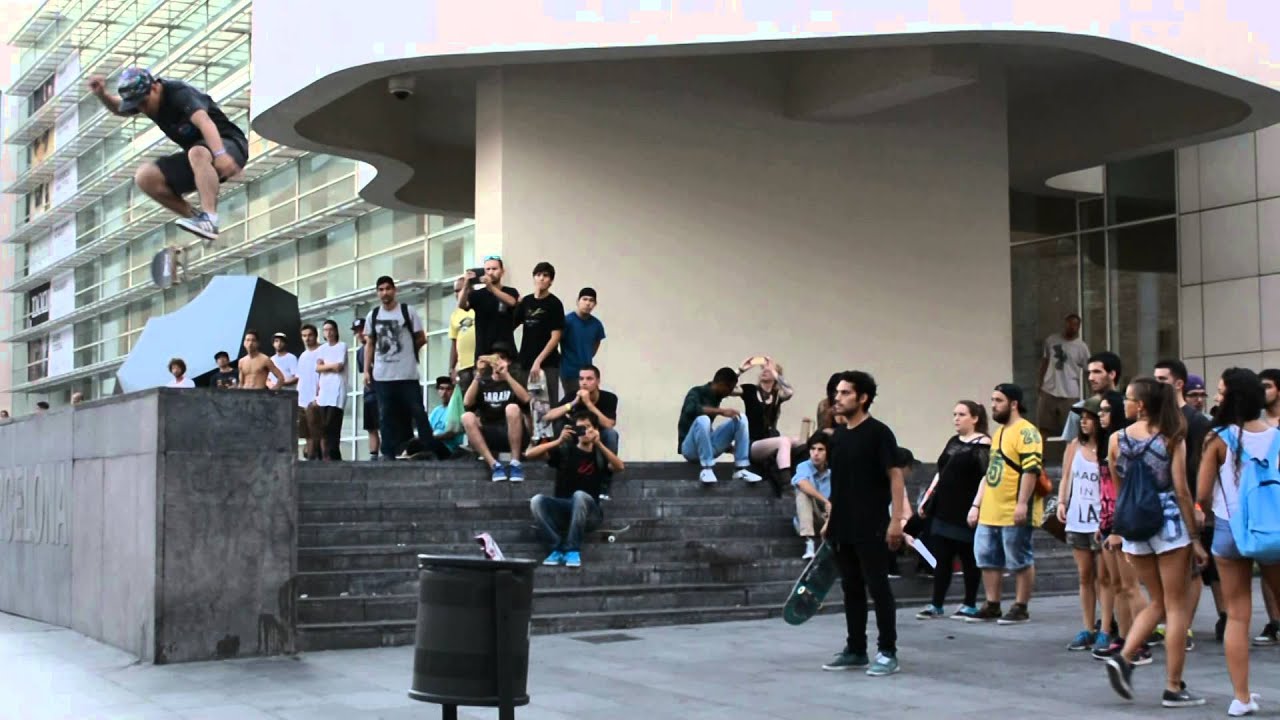 Other popular skating spots in Barcelona:

Skaters are known to prefer skating in the streets, and using the unconventional structures present in them to perform their skating tricks. Though sometimes, practicing works best on the conventional ramps at a skatepark.
Here are some of Barcelona’s best and most popular skate parks:

Barcelona is now famous for being skate-central, a hip city where thousands of professional skaters now reside – and it seems that the scene just keeps growing. If you ever visit the place to enjoy a Barcelona day or night tour, watching skaters (and even joining them) would be an easy-to-do activity. How do you feel about taking up some skating practice? Now that you know just enough about one of the most prominent skating capitals of the world, all that’s left for you to do is to visit this awesome place and give your wheels a spin!