Saint George, roses, books and feasts: here’s how it all ties on this day

Catalonia, the autonomous community of Spain that has developed its own unique and universal identity over history, is known for its vibrant people, colorful streets and festivities that commonly stretch year-round – and perhaps one of the most curious days of the year, and certainly most interesting, is Sant Jordi Day.

Here is how Catalonia celebrates Barcelona’s patron saint with cultural pride, fine taste, literacy, aromatic romanticism and an overall good time – and that day is just around the corner this week!

Overview
A day of mixed celebration overtakes the heart of Catalonia, Barcelona, on the 23rd of April each year. This mix is well defined as patriotic, cultural, spiritual and romantic: here’s how. 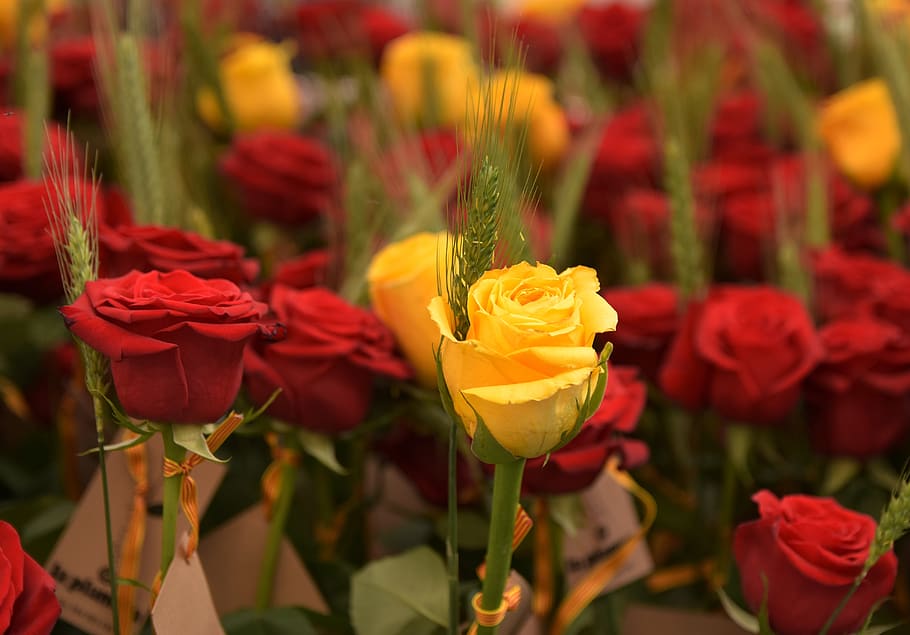 On this day, it is common to see the streets flood with Senyera flags, the emblem of Catalan pride. The day itself has become a celebration of Catalan culture, where many Catalan-exclusive traditions are commonly performed out in public. Particularly on this day, you can find communal spaces, but more specifically Barcelona’s La Rambla, packed from start to end with book and flower stalls. Catalan books and Catalan Roses – to be exchanged by none other than Catalan lovers and families. Dining also takes part of the custom, as traditional food experiences take place on this day, celebrating local cuisine and cultural union.

It is safe to say that April 23rd in Catalonia is a melting pot of the worldwide Valentine’s Day, National day, Thanksgiving and Saint’s Day celebrations – but with a Catalan twist, of course. Although almost all these holidays exist in Spain and are generally celebrated, Catalan people tend to prefer this special day to others. 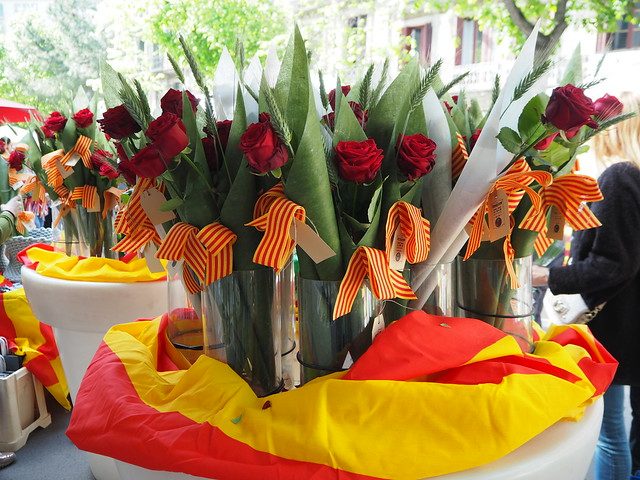 A tradition not to be missed out on, Sant Jordi day is one to honor the love, courage and loyalty of the patron saint – all by commemorating the knight and martyr George of Cappadocia, who died on the 23rd of April 303.

Origin
Saint George, or Sant Jordi in Catalan, is the core celebration of this day – being the patron saint of Barcelona since the 15th century. Legend has it that Saint George killed a dragon that was terrorizing the Montblanc area, and threatened the existence of the king’s daughter. After killing the beast, its bloodshed grew into a rosebush with beautiful red roses. 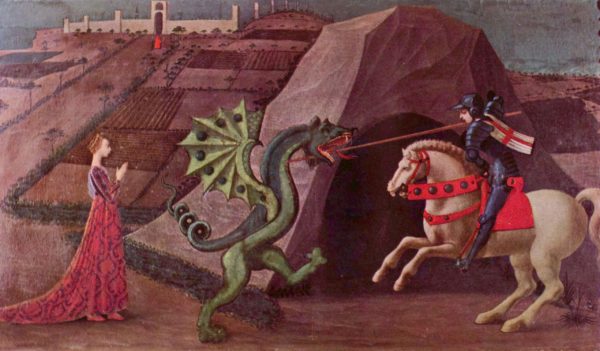 The legend turned to be the heart tradition known as the annual rose fair or ‘lovers fair’, which was held at Palacio de la Generalitat since the early 15th century, now known as Sant Jordi Day.

Roses & Books
Giving your partner a rose in Catalonia on the 23rd of April is now a custom tradition, reminding the Catalan people of the importance of love and family union – without forgetting about the national pride: which is where the books come in.

Sant Jordi day coincides with International Book Day, and during the years of celebration, it became customary to trade roses and books. It started with women receiving a rose and men receiving a book, but the tradition evolved to include both exchanges for both genders. The books are oftentimes in Catalan and are subject around Catalan history and culture. 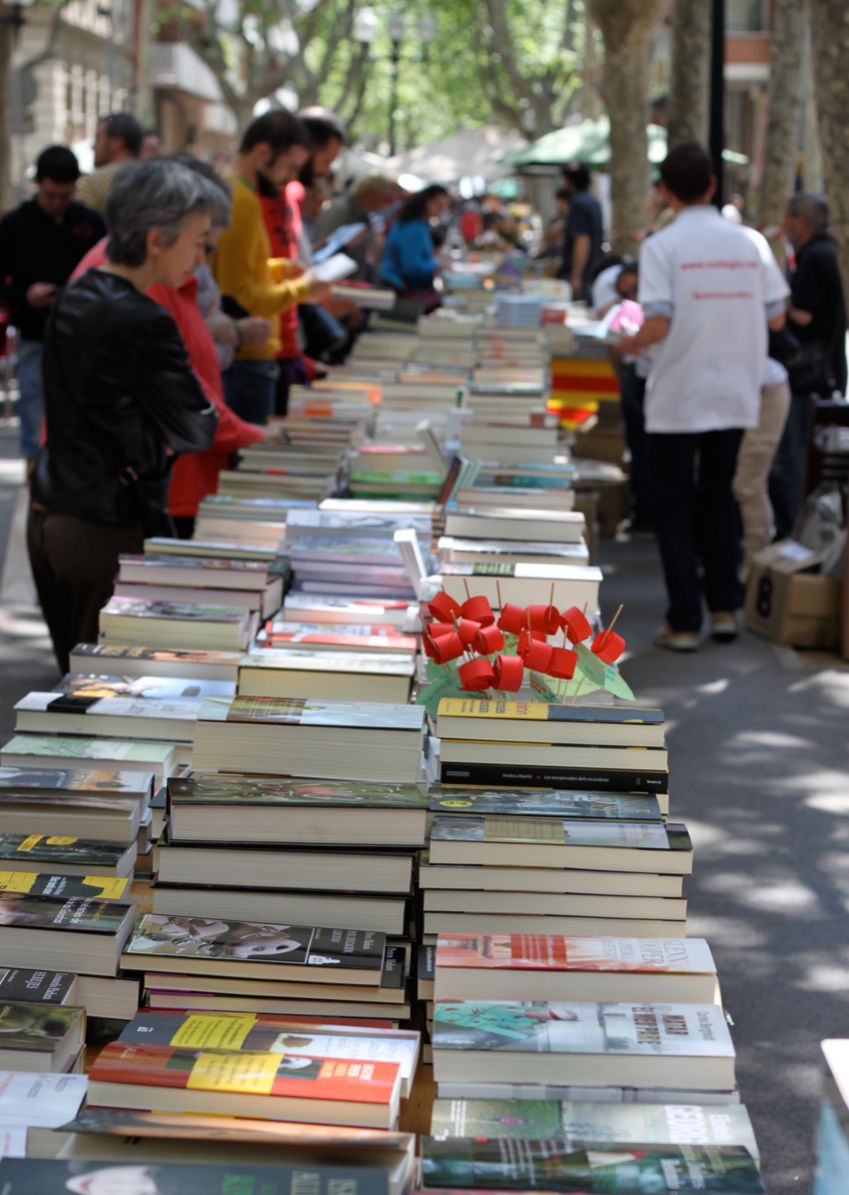 International Book Day is a day to celebrate the literary giants who graced our world with iconic works that’ll stand the test of time; authors like Miguel de Cevantes, Federico Garcia Lorca and William Shakespeare are few that come to mind, along with the many others are widely honored on this day of bookstalls galore! Besides book exchanges and discussions, many Catalan writers of today take to the streets on this day, where they sign and discuss their works with fans and attendees. This day presents a great opportunity for writers, especially up and coming ones, who want to put their work out there and be noticed.

Food
Being that this date is a very important one in Catalan culture, it comes to no surprise that there’s an actual bread type dedicated and eaten on this day. The Pa de Sant Jordi is a rich mix of cheese (usually Mao cheese) and sobrasada. 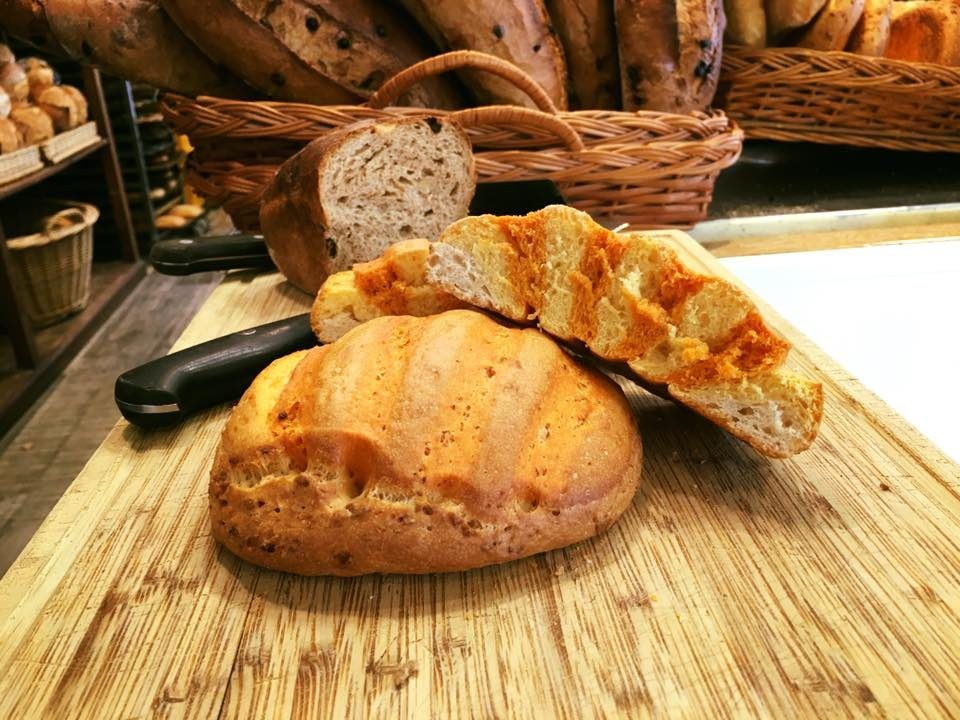 Festivities
Sant Jordi Day is not only celebrated in Barcelona, as the day holds multiple public festivities across Catalonia as a whole. Every municipality within the region participates in organizing its own shows and fairs, with colorful book stalls and luscious rose assortments.

It is a day for walking around the city and taking in the atmosphere of celebration. From La Rambla to Paseo de Gracia, Rambla de Catalonia and Paseo de Sant Joan – public meeting points burst with activities, recitals and workshops. Now it wouldn’t be Catalonia without including traditional dances such as Sardanas, and the popular show of Castells, where towers are made from humans mounting each other. 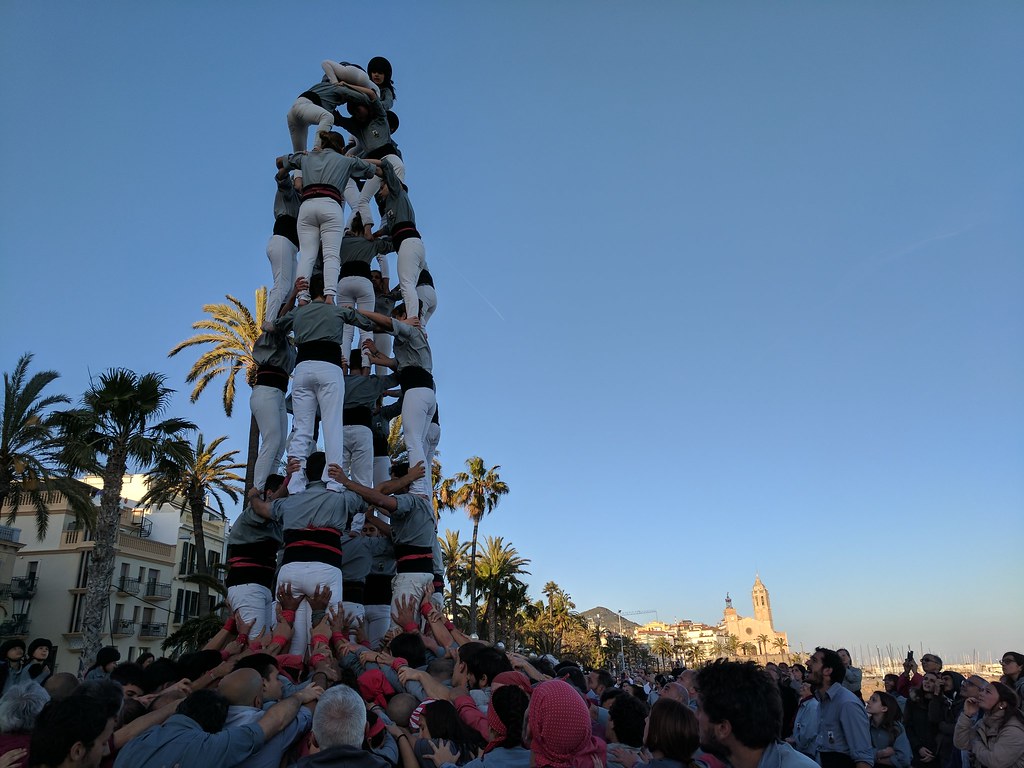 Today
Though the public celebrations were widely affected by the Catalan mobility and capacity limitations in recent pandemic years, and most notably how the celebration in 2020 was pushed to July – Sant Jordi day remains one of the most keenly anticipated Catalan public holidays. 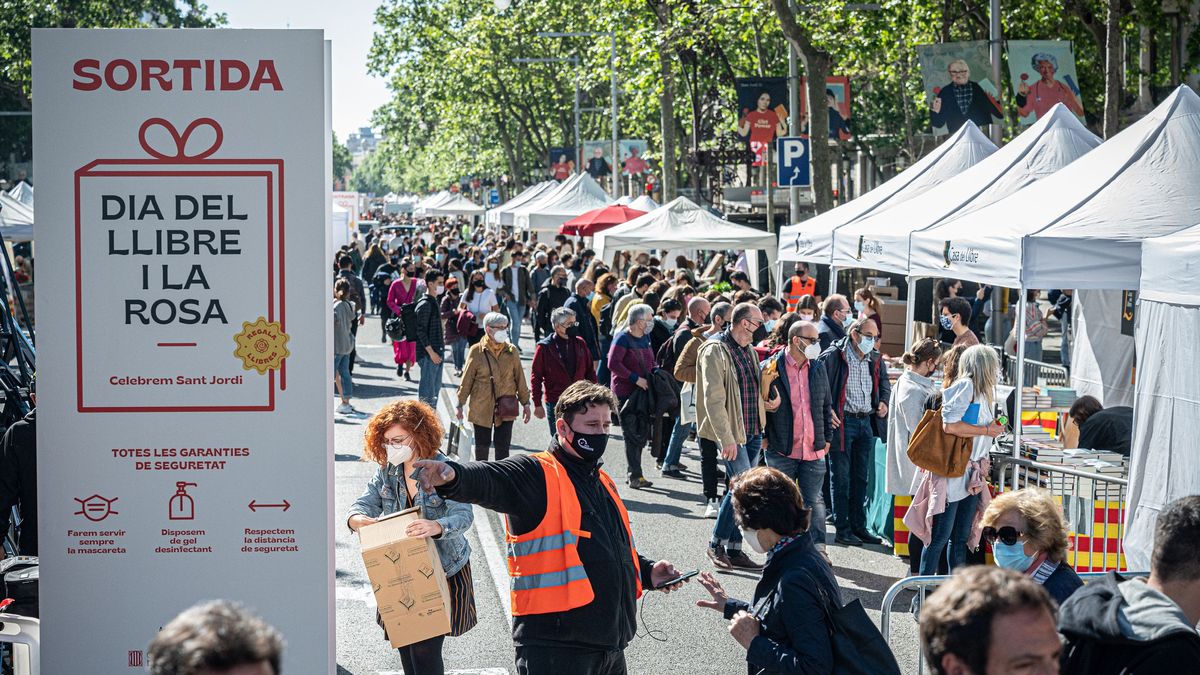 This year, and for the first time ever, the center of Barcelona is being turned into one big Superilla or street superblock between Avinguda Diagonal and Gran Via, where all the contents from books and authors to roses and lovers are centralized. Establishments will begin to start selling their products in the street between the 21st and 23rd of April - so hurry to the towns of Catalonia, where love and culture are uniquely celebrated! And who knows? You might end your night with some good reads and a rose or two…