A celebration of freedom, pride and defeat

Catalonia is the living example on how a rich culture, with the power of its proud people, survives a fascist rule and an oppression of ages – only to emerge again, more powerful than ever, as an economic pillar of the region and a deeply rooted historical community that simply cannot and will not be oppressed. Catalan pride comes with the waving Senyeres and Esteladas, it’s represented by the official and independent Catalan language, and it shows on the smiling faces of every Catalan person celebrating in the streets of Catalonia on every eleventh of September. Catalan pride is certainly year round, however the 11th of September is a special occasion with joyous celebrations filling Catalan lands. This is the National day of Catalonia, known as La Diada in Catalan.

It is common to find nations or thriving cultures celebrating their national days on dates that mark their independence or victory from a historical event. In the case of Catalonia’s La Diada, the date of celebration marks a day of heavy military defeat –  way back in 1714. On that day, Barcelona surrendered amidst the siege it was under and fell into Bourbon hands. This resulted in the eradication of many of Catalonia’s rights and institutions set in the year 1283. With that, Catalan was no longer considered an official language, and the thriving people of Catalonia became the oppressed. It was with the Utrecht Treaty that the Queen of Great Britain insisted that the inhabitants of the Principality of Catalonia obtain their right to possess all their estates and honors, and also have their ancient privileges preserved safe and untouched. This allowed the people of Catalonia to prosper and fight their way through oppressive years, whereby the national day of Catalonia was chosen by the Catalan themselves to be on their day of defeat (September 11th). Between the years 1923 and 1976, during the Spanish rule of dictators Miguel Primo de Rivera and General Francisco Franco, the National Day of Catalonia was prohibited by law, though it was being celebrated by proud Catalans underground. It was in 1980 that the Catalan Parliament officially declared September 11th to be a national holiday, and has been widely celebrated publicly since then. 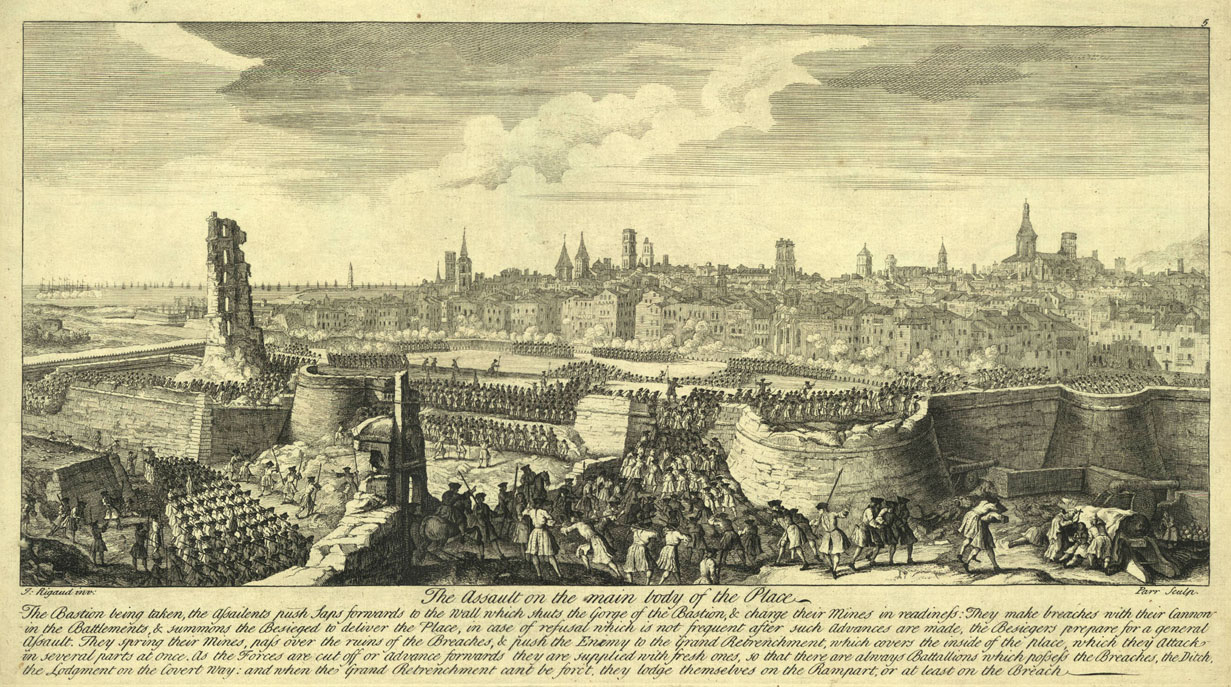 Today, the National Day of Catalonia is not only celebrated in memory of the end of the 14-year Spanish Succession War in 1714 and commemorates the defeat in which secular liberties were lost, it also acts as a form of protest calling for the full independence of Catalonia from Spain. The use of Estelada flags is to signify Catalonia’s fight for independence, as the Estelada flag is almost identical to the yellow and four red stripes flag called La Senyera (the official Catalan flag), with an additional blue triangle with a white star. This addition is a political movement based on the flags that were seen in Cuba during its fight for independence from Spain. Manifestations, protests and uproars have increased over the years since the nullification of laws by the Spanish government on 2010, laws that give back various powers to Catalonia – this resulted with an amplification of attendees on Catalonia’s National Day, with a special event in 2013 in which a human chain was formed spanning the entirety of Catalonia’s coastline. 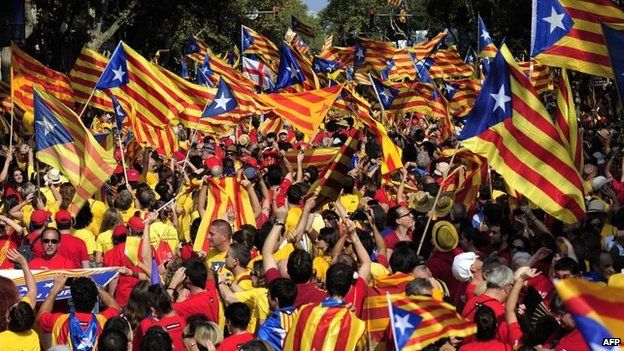 Now let’s get into what goes on in Catalonia during La Diada, besides the masses filling the streets and waving their national flags. The National Day of Catalonia is one that pushes almost every Catalan in the region to leave their houses and head outdoors to participate in various activities. From official marches and tributes to soldiers who died defending Barcelona for years, to political events, open house events, gastronomic offerings around every corner and lively musical performances and concerts. Many citizens also lay flowers on the Diada at the memorial plaza Fossar de les Moreres by the Santa Maria del Mar basilica in Barcelona’s Gothic Quarter, where 4,000 martyrs of the siege were buried in a mass grave. 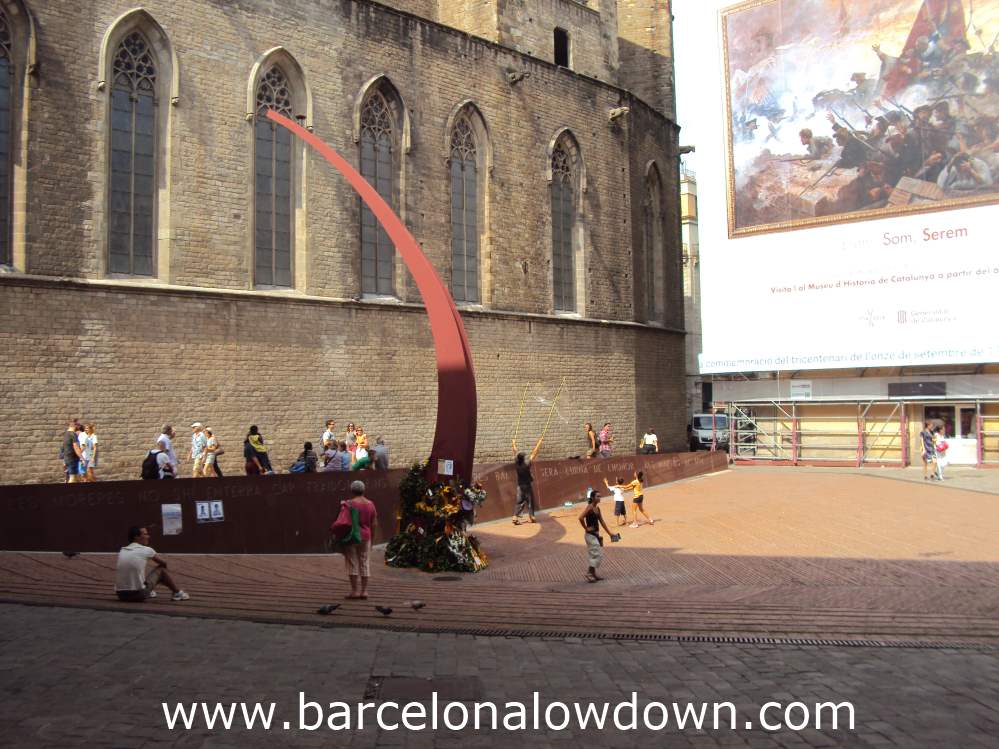 For every newcomer or non-Catalan participant, this joyous celebration is a great way to witness and learn more about Catalan traditions such as the Sardana circle dance, firework parades named Correfocs (which translates to fire-runs) and impressive human towers named Castellers. These celebrations and events are commonly carried out at specific places such as Passeig de Sant Joan, Passeig de Lluís Companys and Parc de la Ciutadella. 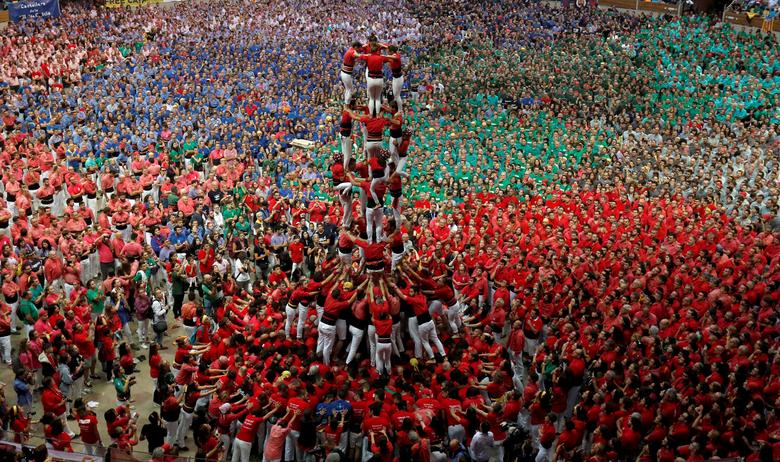 During this public holiday, almost everything in Catalonia is closed. Some restaurants in the more populated areas such as Passeig de Gracia and Las Ramblas are open, however they are a bit more expensive. Maremagnum Shopping Centre opens year round and does not close on this particular day. Metros and other public transportation generally slow down due to the high demand, making circulation and moving around a rather difficult thing on this day. Cultural activities are a great option for those visiting the region on this day, with some of the city’s greatest attractions open to the public for free on September 11th. Attractions such as Palau Güell and the National Museum of Catalan Art (MNAC) are open for free on that day; other museums could be open but require entry fees. Another day during the end of September called the Mercè celebrations, however, has the majority of the museums in the area open for free all day long. Let’s just say September in Catalonia is an economical trip for all museum lovers! 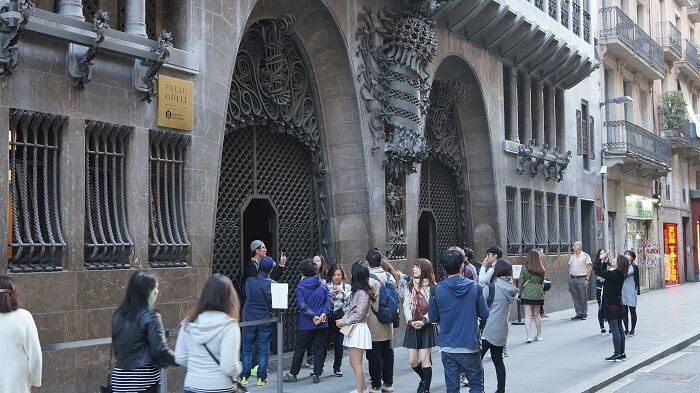 Catalonia is known to be one of the most gorgeous and deeply cultural communities of Spain, with national pride like no other. If you’re ever in the area for the month of September, do not pass on taking part in the jubilant events and activities, especially like La Diada, of Catalonia. Bear in mind that any activities taking place these days require social distancing and mask wearing is compulsory. Catalans are known for their open nature and welcoming personalities, so if you wish to learn more while observing or being part of the celebrations, just ask a local and they’ll be more than happy to elaborate on what it means to them to be a part of this amazing region. Your trip will certainly be filled with unforgettable experiences and emotions. It also doesn’t hurt to get somewhat acquainted with Catalan traditions by looking them up from home, start off by learning more about Catalonia’s National Anthem, so you’ll be able to sing along and really impress the proud Catalans during their most prideful day of the year.